The importance of digitized worldwide available data for the future development of taxonomy was just recently emphasized (Godfray 2002a, b). The Orthoptera are one of the few insect groups for which complete digital registers of valid taxa exist (Orthoptera Species File Online:OSF). Nevertheless, much of the information stored within museum collections is still not readily accessible, because most of it is not digitized (Lampe & Riede 2001).

EDISis intended to provide access to relevant information about insects and other arthropods for research and the general public and to promote digitization of the data scattered over various entomological collections in Germany in a comprehensive database, the SYSTAX database at the University Ulm.

The aim of DORSA is the database access to important Orthoptera (grasshoppers, katydids and crickets) specimens in German research collections including multimedia information as pictures and sounds, and an internet-link to the global species database Orthoptera Species File (OSF).

All information in DORSA is specimen based. It is thus possible to reproduce where single specimens have been collected, how they looked like, what was their stridulation etc. DORSA is thus complementary to the Orthoptera Species File where the taxonomic background and general information on the species can be found. In more detail, DORSA covers the following points:

The Zoological Museum of the Humboldt-University Berlin houses by far the greatest number of Orthoptera types. The aim of specimen registration is a type catalogue of the Orthoptera housed in German collections and to verify the corresponding information in the Orthoptera Species File Online (above) which is the taxonomic backbone for our database. Compiling the specimen information in the museums (Tab. 1-3) covered all primary types, most of the paratypes, additional specimens on which taxonomic revisions were based and voucher specimens for which sound recordings are available. We started with the information given in the Orthoptera Species File (OSF) [version April 2000] which contained information on primary types compiled from published data (presumption in Tab. 1). With this information we checked what is actually housed in the museum collections (museum data). It followed a validity check. In case of disagreement between the information in OSF and the actual museum data, it was necessary to consult the original publications. Finally the databases were updated as was done with the specimen information in the museums when necessary. After the validity check, the inventory data are imported into the all-biology database SYSTAX. In this database, interested users can find the specimen information together with specimen based multimedia data (images and sounds). Moreover, DORSA is linked on a species to species level with OSF2 thus that additional taxonomic information, synonyms, references, will be available by a link from DORSA to OSF, while when searching OSF it will be possible to find specimens and their media data in DORSA.

Table 1. Registration of type specimens of Orthoptera without Tridactyloidea in German museum collections by February 2004.

1settled [species with specimens in several collections are counted only once]

Table 3. Registration of Orthoptera types from different taxonomic subgroups (as of February 2004).

2without specimens of ZMB Berlin

To view the specimens registration in an international frame, the number of type specimens in German collections was compared with the number of described taxa worldwide. The number of described taxa was compiled from OSF2 at 23.III.2003. The number of species group taxa (species, subspecies, synonyms, extant taxa only) accounts for 28876 names for all Orthoptera (Tettigonioidea 7500, Stenopelmatoidea 1724, Grylloidea 4637, Tetrigoidea 1537, Acridomorpha 13122, Tridactyloidea 356). For about one tenth of those names, type specimens exist in German collections: depending on the taxonomic group, for 614 % primary types or for 717 % any types including paratypes (Figs 1-2). The relative number of types is highest in Tetrigoidea with 14% and lowest in Grylloidea with 6% of the primary types. In absolute numbers, most type specimens belong to Acridomorpha.

The aim was to create a "virtual museum" that documents the type specimens and helps to reduce the inquiries about and the loan of type material. Most type specimens are documented by photographs. In total, more than 30000 images have been taken. Photographic documentation includes full specimen labels, general habitus of the specimens, details of diagnostic characters, and also genital structures if this did not require extra manipulation of the specimens. The images are provided with size scales. All media data are linked to a specific specimen. Full documentation is available in SYSTAX.

Sound recordings of Orthoptera were usually done by private researchers and were not previously compiled in a public sound archive. DORSA establishes the first comprehensive public sound library for Orthoptera sounds in Germany, and makes them available on the internet. More than 12000 recordings were compiled that are linked with known individual specimens. They were contributed by H. Braun, K.-G. Heller, S. Ingrisch, F. Nischk, K. Riede and G.H. Schmidt; others will follow. The sound library is the base for the development of software for automatic song recognition.

Based on the DORSA song database, a rapid assessment tool is developed for automated song recognition (Dietrich et al. 2002). In principle, automatic song recognition in crickets (Grylloidea) and katydids (Tettigonioidea) follows the scheme:

a) to combine the classifier outputs of different features, b) for temporal fusion of classifier outputs (Fig. 4). To train the neural network architecture successfully a data set of known taxa is needed. For that as many as possible songs of different individuals of the same species should be used. At present the tool for the automatic sound recognition runs properly with a set of 215 songs from 137 individuals of 30 cricket species (for details in see Palm & Dietrich 2001). 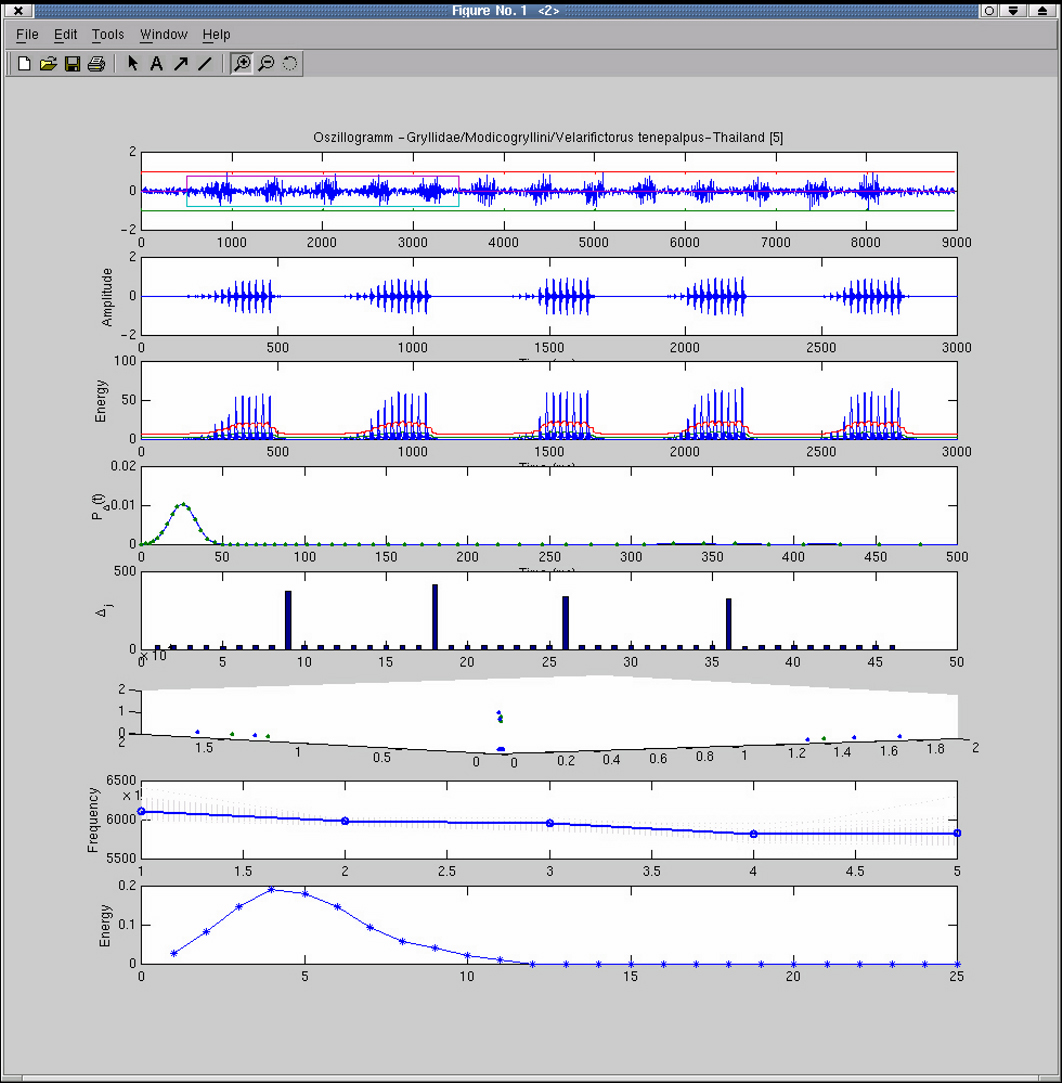 Figure 3. Characters most suitable for the classification of cricket songs are the distances between pulses, the duration of pulses, and the frequency course within pulses. The feature vectors are classified individually and the results of the single classifiers are combined through classifier fusion. [From Ingrisch et al. 2004b]. 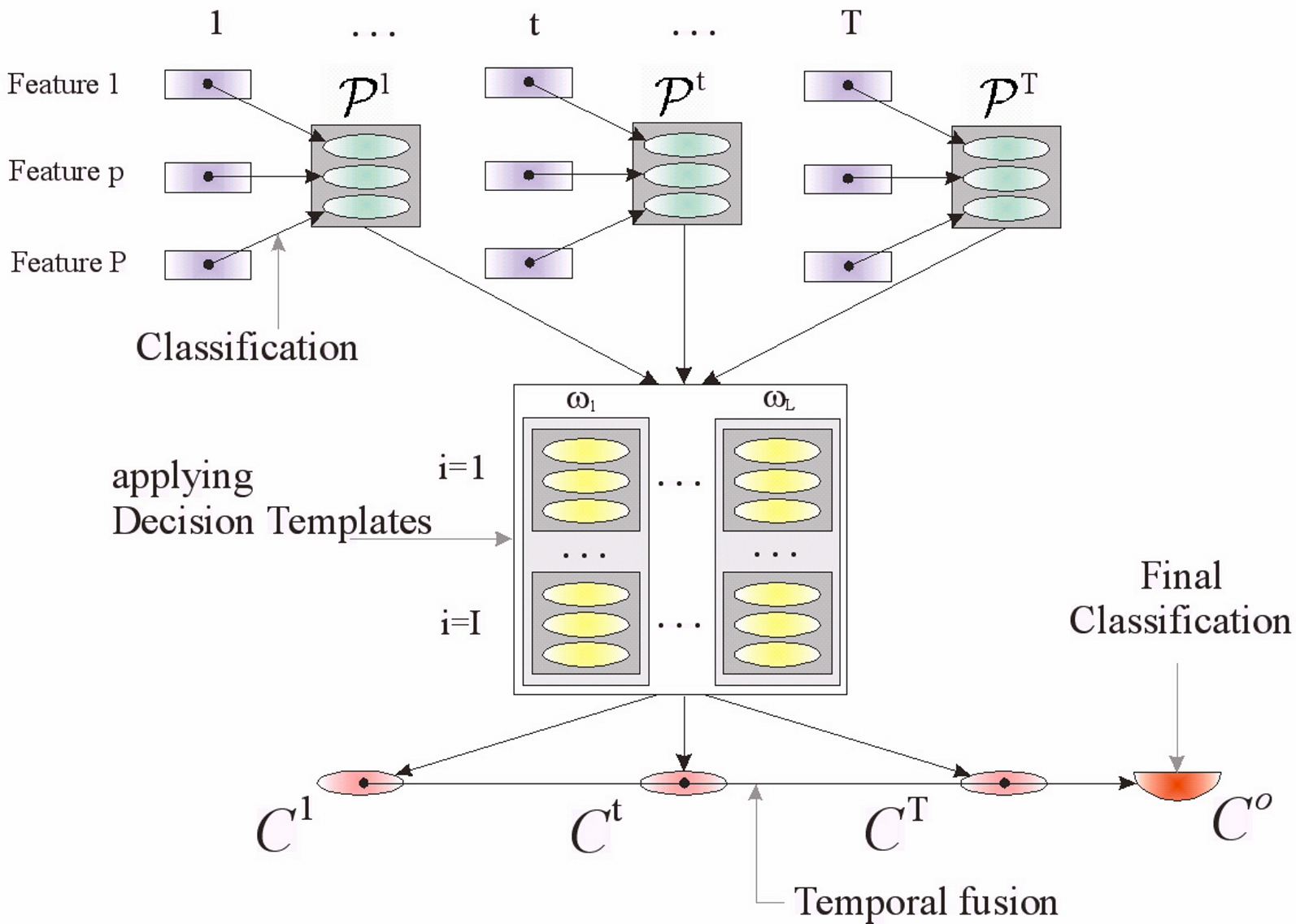 It is often difficult to find the exact locality for classical specimens as old types. The information given on labels may be either not precise or the names of places or their affiliation to countries has changed since the time of collection. Fortunately there are several expedition reports to allow tracing the localities with sufficient precision. For all specimens with the locality information sufficiently reliable, we geo-referenced the collection sites with latitude/longitude co-ordinates (3100 out of the roughly 5500 locality data). This will help future users to find this information easily, and it allows mapping by a geographical information system (GIS). In the GIS the distribution of specimens or taxa can be overlaid with additional information such as environmental data. Such applications run already over the word wide web using Open GIStechnology. In cooperation with the Institute for Geography of the University of Bonn (GIUB)we mapped the DORSA locality data on an Open GIS server >> Dorsa Map Server

The evaluation of the locality data may reveal interesting results even without geo-referencing. For almost all types there exist at least some basic information on the country of origin which allowed to calculate the number of type specimens for each country of origin (Riede et al. 2004; Fig. 5). By that way DORSA helped to uncover basic taxonomic information formerly hidden in specialized publications of in museum collections. Part of the types from tropical countries represent unique specimens of taxa that might be already extinct. Natural history collections housing type specimens should thus be regarded as belong to our worlds cultural heritage.

The worldwide name register "Orthoptera Species File" (OSF) is the taxonomic reference for DORSA. A unique species ID was introduced in OSF by D. Eades that allows species specific links between OSF and other databases. DORSA is linked to OSF on a species to species basis. The actual taxonomic status of the taxa included in DORSA can thus be checked using the link to OSF. While in OSF it is possible to find specimens included in DORSA and open the corresponding information by a link to SYSTAX.


Sumup of data recorded by DORSA to the eND of 2003


Links to the Data provided by DORSA

From April 2000 to March 2003, DORSA was funded by the German Federal Ministry of Education and Research (BMBF). Our special thanks go to the curators of the museums mentioned above for their cooperation when digitizing the specimen data. D. Eades (Illinois Natural History Survey) cooperated with linking of DORSA to OSF.